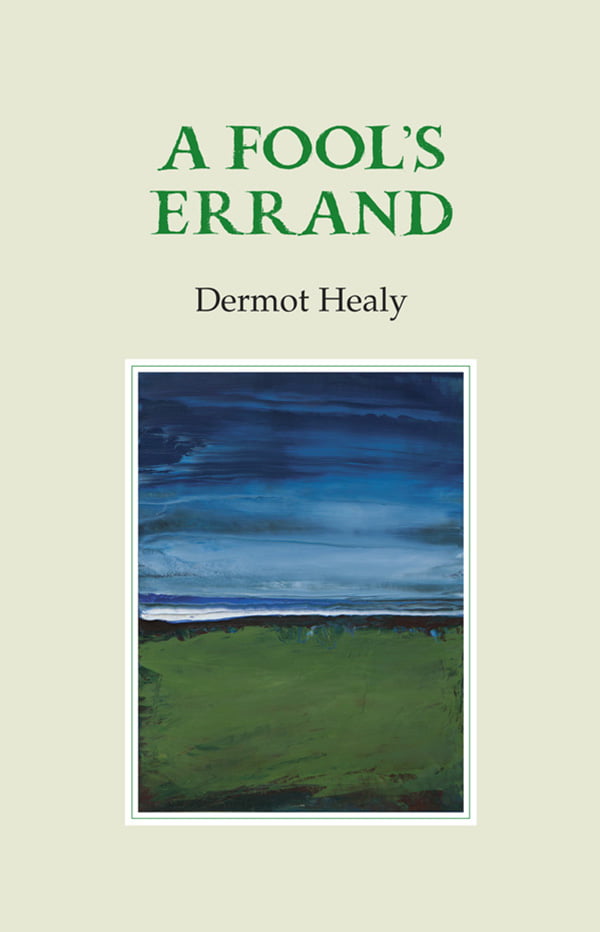 Certain poems have a way of engaging a particular sense. Reading T.S. Eliot's Love Song of J. Alfred Prufrock always makes me feel something brush against my arm, 'a pair of ragged claws, scuttling across the floors of silent seas'. After reading Anna Akhmatova's More About the City, staircases and empty rooms always smell a little of 'burnt coffee'.  It is difficult, after reading Ted Hughes' Crow, not to leave with an aftertaste of' 'clods of stone, earth and skin'.

In A Fool's Errand, Dermot Healy's masterful book-length poem, the sense that keens afterwards, and during, is the sense of hearing. Just thinking of the poem, not the words, just the sense of it, fills my inner ears with the geese's uproar, with this rude, sonic turmoil in the sky. Yet of course the audible aspect of the work is only really the beginning, it is only what causes you to look up in the first place. The poem weaves in the hands of the sky-clock, the invisible workings of mortality, Healy's curious sense of time as a flowing continuum and a single frame. With its setting deeply intertwined in Maugherow, Co. Sligo, when I was invited by Tara McGowan and Cairde Festival to imagine a project that related to the Sligo area, A Fool's Errand sprang immediately to mind.

It was clarinetist Paul Roe who introduced me to the poem in 2013, when he encountered my Flocking III for saxophone orchestra on the murmurations of the starling. Later then, in 2014, whilst in residence at the Centre Culturel Irlandais in Paris, I worked through the extensive Healy collection in the Mediathèque, wondering at the stark difference between his poetry and his novels. And then finally, whilst watching Garry Keane's beautiful biopic The Writing in the Sky on a night flight across the Atlantic to California in 2015, I understood that a musical setting of the poem should approach the geese not merely as 'letters in the sky' but also as voices in the sky, and at its centre should be the sounds of the barnacle geese in their natural habitat in North Sligo, where they spend the Winter months before bi-annual voyage to Iceland every spring.

The poem, and the landscape, are also strikingly visual…the reader is always looking up and reading the monochrome alphabet of bird-bodies against a bright, white sky…and so to measure the time with the eyes required a live painter to narrate the story throughout, and to leave a mark once the music had stopped.

As I never had the opportunity to meet Dermot in person, recording the voices of his family and friends was a way of bringing him into the work. In my many (forty-nine) meetings with those that knew him I gradually amassed a set of stories that coloured in the writing on the page. Yet somehow, there was still a voice missing. The ghostly significance of the poem's dedication to fiddle player Peter Galligan was the key - it established that I needed to bring traditional music into the piece, to give voice to the tunes that already populate the pages.

And so now, at the end of this long journey, if I close my eyes and think of the poem it is not only the sounds of the geese that I hear, but also that which is left behind, when 'the orchestra of memory takes to the air.'