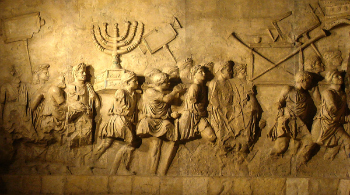 
Maoz Tsur is traditionally sung during Channukah, the Jewish festival of light that takes place around Christmas time each year. Roughly translated as 'Rock of Ages', the Hebrew lyrics commemerate the miracle of the besieged Second Temple in Jerusalem, when a single day's worth of oil used for maintaining the 'everlasting' lamp kept the flame alight for eight days and eight nights, and heralded the rescue of the inhabitants.

There are several variations of the melody in existence, but the one that I took as a point of departure for this piece is believed to have originally been a German drinking song from the Eighteenth Century.
This reworking was commissioned by Emma O'Halloran for the SoundSet Voices and was premièred in the Contemporary Music Centre, Dublin on December 15th 2010.
Link to Score