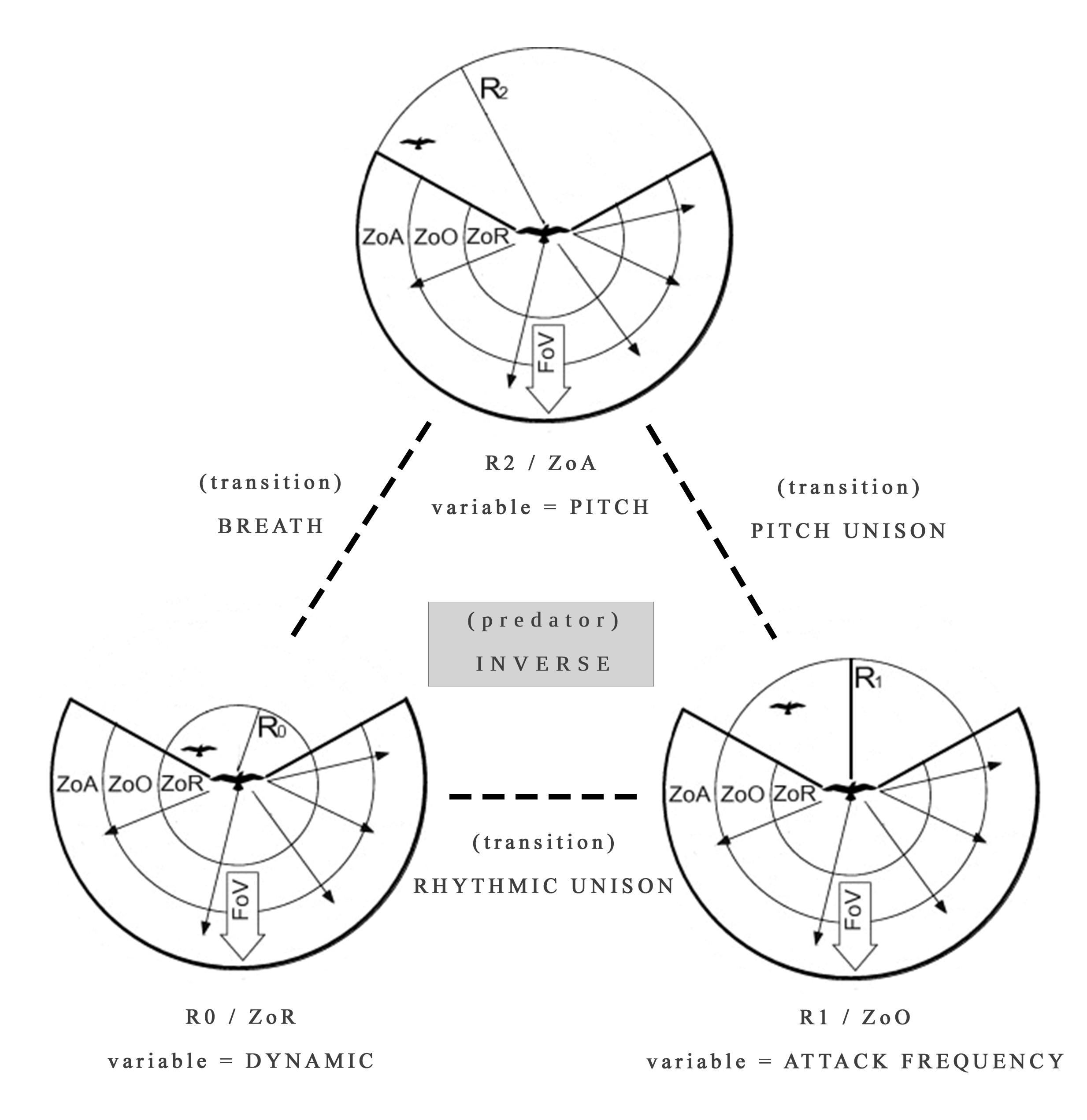 
Commissioned by the European Saxophone Ensemble (ESE), Flocking III explores the mechanisms of the emergent system, in which individual components can be perceived to express themselves as a group. Nature offers many spectacular examples of this type of behaviour, of which perhaps the most beautiful is the flocking of birds in flight.

Of all the birds found in this world, the starling flock is considered to be the most impressive in terms of number and reaction time, and so perhaps for this reason it is given the most beautiful of names – a murmuration. Starling murmurations are also the subject of the most scientific research for these very same reasons; flocks can number greater than 100,000 individual birds and their reaction time whilst in flight as little as 0.026 seconds.

My work on the Flocking Series was informed by the research of computer scientist Dr. Pavlos Antoniou of the University of Cyprus and mathematical biologists Luke Coburn and Dr. Iain Couzin of CouzinLabs in Princeton University. As source material for Flocking I-II, data derived from bird flocking simulators (or boids) and their x,y and z co-ordinates in space was translated in musical values of pitch, attack frequency and dynamic. The streams of numbers yielded behavioural types that emulated the movements of birds in the air and in places the score itself bore resemblance to flock patterns and the motion of the wing.

Flocking III is a new type of score, based on the realisation that humans also display behavioural patterns and can express themselves as a group. In fact we do this every day of our lives, whether walking in a crowd or listening and responding in the language of music. The grammatical structure of music is formed of basic variables, just as a spoken language is self-organised, and these emergent properties can be translated into action through improvisation – indeed this is traditionally how we learn to play music in group scenarios.

Performance of the piece requires each member of the ensemble to listen and respond to three variables. These areas are defined as ZoR, ZoO and ZoA and correspond to the zones of Repulsion, Orientation and Attraction, which are used in simulations to translate the motions of flock mechanics. These virtual areas govern the actions of individual birds – when one bird crosses another's zone of Repulsion the second bird will instinctively move away, triggered by a nervous system response that avoids collision. Similarly, birds will align with others' trajectories, or move towards other birds, when the zones of Orientation or Attraction are crossed.