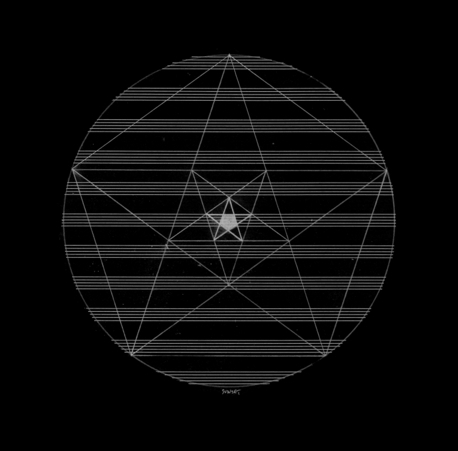 for accordion and string quartet


The Second Quintet was commissioned by the 20th Sligo International Chamber Music Festival, supported by Sligo Co. Council's Creative Ireland Programme, and was premièred by Dermot Dunne and the Vogler Quartet in St. Columba's church, Drumcliffe on May 6th 2019.

The work was conceived during the ezan (call to prayer) as heard between the Blue Mosque and Hagia Sophia in Sultanahmet Meydanı, Istanbul.

The harmonic system of the piece, which opens and closes with breath (rūḥ), draws on the maqamat of the five daily calls – saba (Fajr), bayātī (Zuhr), rast (Asr), segyah (Maghrib) and hijaz (Isha).

Its rhythmic structure is derived from the relationship between the tonic and dominant notes of each maqam, inspired by the geometry of tawḥīd (unity) as described in ‘The Sense of Unity: The Sufi Tradition in Persian Architecture’ by Nader Ardalan and Laleh Bakhtiar (1973).

There are deep connections between the work and my first Quintet for Clarinet and String Quartet (2010); as such they may be considered consecutive movements in a longer cycle.

This tracing of the interweave between the Jewish cantorial traditions of chazzanut and the recitations of the muezzin in Islam is grounded in the principle of Waḥdat al-wujūd (Unity of Being) as expressed in the philosophy of Ibn Arabī (1165-1240).

In ‘The Guide for the Perplexed’ (1190), Ibn Arabī’s contemporary Moses Maimonides wrote that “We are like those who, though beholding frequent flashes of lightning, still find themselves in the thickest darkness of the night."

This work proposes that music is an incandescence of time.