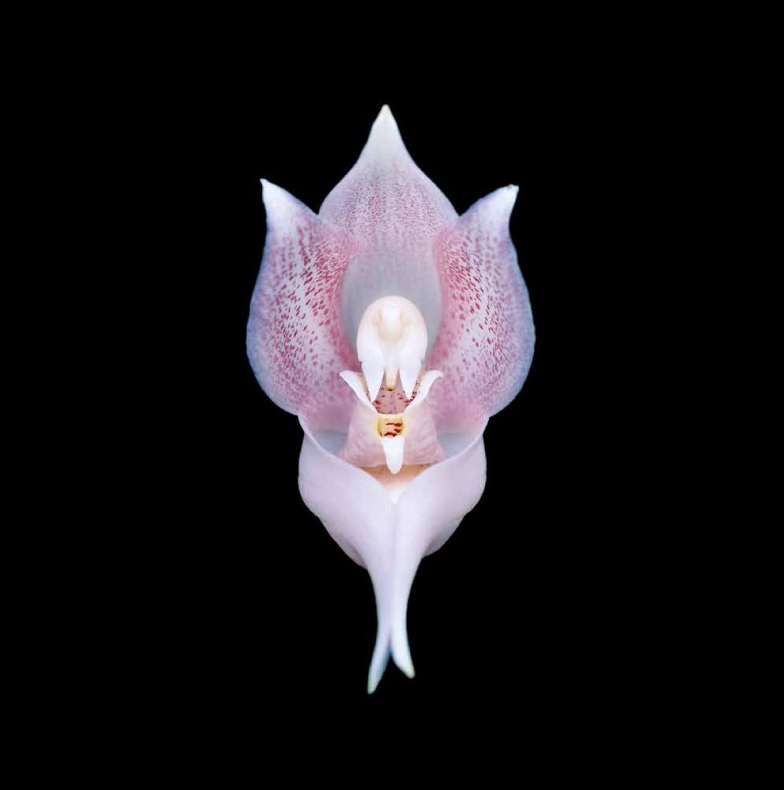 for solo cello and light

“The flower longs with its petals

and thought descends upon the flower.”

Orchidées is an étude that explores the evolution of the orchid over its 100-million year history by translating the DNA gene sequences that form the architecture of the flower into music.

The work was developed in collaboration with orchidologists Barbara Gravendeel, Dewi Pramanik and Richa Kusumawati of Naturalis Biodiversity Center Leiden, Alain Benoît of the Société Française d'Orchidophilie, photographers Thomas Balaÿ and Lanka Perren, and in consultation with geneticists Aoife O'Driscoll and Enrico Coen. The project was supported by the Centre Culturel Irlandais, Paris and the Arts Council / An Chomhairle Ealaíon, and is dedicated to cellist Kate Ellis.

The Orchidaceae form one of the world's most diverse families of flowering plant – endemic to almost every geographical region found on Earth, from tropical rainforest to arid desert, from marshy boglands to Antarctic tundra. Driven by formal investigation into this extraordinary mutability of orchids, whose flowers have evolved to incredible architectural complexity, Orchidées inquires what their sensitivity and responsiveness to environmental conditions can teach us about our own survival in a rapidly changing world, with its ever-increasingly complex web of ecological crisis.

In a 2010 interview for ‘Usbek & Rica', the great thinker Michel Serres stated that "one can practise philosophy with flowers that blossom in the spring, just as well as with mathematics."

Taking him at his word, the work posits the notion than in an ecosystem of knowledge, music is a keystone species – a way of building networks of ideas and rendering them communicable in a language accessible to all. Playing with a gestural fluidity between movement, sound and light, Orchidées looks for the deep patterns that flowers can teach of life here on Earth, asking why it is that the flower has become, so very slowly and all at once, an object of fascination for countless co-evolved species, including ourselves?

In the early years of the 21st century, scientists and thinkers have taken leaps and bounds towards attaining an understanding of this process.

In 'The Secret History of Flowers' (Éditions Humensis, 2019), François Parcy declares that “to the burning question of the evolution of the flower, we now find fresh answers…they have benefited from the arrival of new members of the gene family by assembling teams of floral organ builders, led by an architect gene. ”

Translating this contemporary understanding of genetic architecture into musical form, Orchidées sonifies the motifs that play specific roles in the orchid flower's development (known as the Perianth Code) and the nested relationships between them, rendering perceptible to an audience this hidden process of evolutionary development over millions of years of change and growth.

Understanding flowers by thinking through a complex process that acts both in real-time and across almost unthinkable spans of ecological time, calls for modes of thought that are able to hold networked ideas in simultaneity. This type of thinking resonates deeply with the act of composition. The development of musical motifs in time and their inter-relationship, the theme and variation form, is found in endemic musical cultures from all around the world. As its genetic fingerprint, specifically in the use of natural harmonics, Orchidées takes as inspiration the Sei Capricci (1976) of Salvatore Sciarrino, itself a homage to the 24 Caprices (1819) of Niccolo Paganini.

Culture in its scientific definition is a place of growth. Deep collaborations and cross-pollinations like the Orchidées project therefore play a grafting function, with contemporary artists playing a crucial role in the transmutation of scientific research – approaching data from synthetic and non-linear perspectives and providing an amplification of research impact in terms of public engagement.

Barbara Gravendeel adds “in 1862, Charles Darwin published a book on the contrivances by which orchids are fertilised, considering these 'as varied and almost as perfect as any of the most beautiful adaptations in the animal kingdom'. As an evolutionary biologist and orchidologist, I follow in Darwin's footsteps in applying modern genomics techniques to slowly unravel the genetic codes of the transcription factors that shape the very same orchid floral contrivances that Darwin marveled at more than 150 years ago. Hearing the amino acid sequences coding for these contrivances being transformed into musical notes is a life-enriching experience for me.”

In ‘The Art of Genes' (Oxford, 1999) Enrico Coen finds common ground between epigenetic reactivity and the creative process - “the artist is continually looking and being influenced by what they see. As soon as some paint is mixed and put on the canvas, the artist sees a new splash of colour that wasn't there before. Artists cannot paint pictures with their eyes closed.” In his descriptions of genes as “hidden colours”, Coen affords a technicolour picture of the internal mechanics of evolution at work.

The technical mechanism of the composition maps the translations of the gene expressions controlling flower architecture, specifically perianth and labellum formation, by mapping the nucleobase and amino acid sequences that comprise the orchid's DNA codes to form individual movements for each of the five evolutionary sub-families of the genus - Apostasioideae, Vanilloideae, Cypripedioideae, Orchidoideae, Epidendroideae. This process takes place across numerous scales simultaneously – translating the nucleobase sequences (Cytosine, Guanine, Thymine and Adenine) to the harmonics of the cello's four strings (C-G-D-A), the wider codons / protein sequences to specific pitch sets and the motivic gene architecture to gestural techniques on the instrument. This process allows the audience to ‘hear' the DNA sequences of the five families, sonifying the themes, repetitions and increases in complexity that are hidden in the code of 100-million years of orchid evolution.